The two most important parts of a Facebook ad are the content and the text. The time spent testing these is paid for only by better performance during your Facebook campaign very quickly. The text establishes the justification for the development of advertising.

The development is based on testing and knowledge of Facebook Ads.

To build your Facebook campaign, you need to know what works and what doesn’t. Finding this out is very simple. facebook advertising tool through. You can create several different ads and test which one works best. You’ll then choose the ad that best suits your needs and allocate your advertising budget to it.

Results can vary by several tens of a percentage between different Facebook ads, so it’s worth first determining which ad performs best through testing.

I recommend that you start testing the image yourself. In a Facebook ad, the image is the most visible part for people and strongly influences the willingness to click on the ad.

Once you’ve decided which product you want to market and order your ad image, make at least two different versions. The more versions you make, the better you can test what works and what doesn’t. The images should not be completely different, but only change one point at a time. This will let you know what change is affecting people’s willingness to click on your ad.

Below are two sample images that could promote our company’s Facebook site. One has our company logo and the other has the familiar Facebook thumb. Only this part changes between ads and we could test which image works best for people if we get more likes on our Facebook site, for example.

In Facebook marketing, the differences between images don’t have to be big. It is easier to outline between small differences which has a positive effect on the result.

Once we find a winning image, we can try two different texts on the image or start marketing the image directly. Testing takes time and money, so the number of tests should be proportional to the size of your Facebook campaign.

Now you’ve found an image that works well for Facebook marketing, so you’re running another round of testing with the text section of your Facebook ad.

Let’s assume that the example used is where the Facebook thumb brought more likes to our Facebook page in the first phase of testing. Now, two ads are created with the same image, and only the post text is changed between the ads.

Use the examples below to see how your Facebook ad changes. 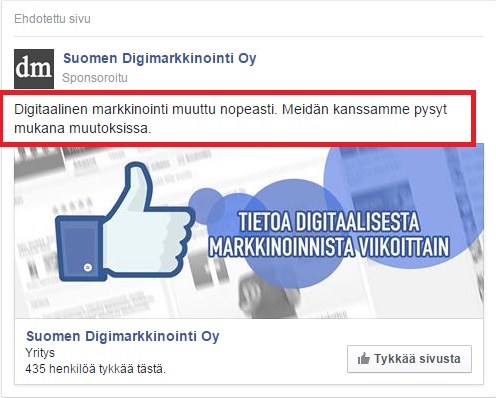 In the text, it is important that you describe the benefits of clicking on the ad.

Now, I’m running my ads on a small budget for a while to the same audience to see how changing the text affects ad performance. The copy that gets the most action goes into the actual ad campaign, into which the actual marketing budget is put.

You can achieve significant results with Facebook marketing. example case

As you can see from the example above, Facebook advertising can be developed long before the actual campaign starts. A winning and effective ad has been created from two images and two ad copy.

So, with a clear conscience, we can invest more money in a marketing campaign because we know that the results are coming.

Then you can also brush up on tests. Consider how much time and money you want to spend on testing. When planning a €1,000 Facebook campaign, it’s a good idea to keep testing in plain text. If, on the other hand, the campaign is long and Facebook is an integral part of marketing your business, then testing can be ongoing and ad development is really profitable for your campaign, even on a weekly basis.

So, match the number of tests to the size of your campaign, but never miss out on tests. We help our clients develop effective advertising on Facebook. Ongoing testing finds the working equation in the target audience and ad that produces measurable results.